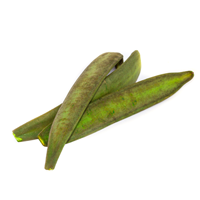 Chrysin is a flavone, which is a class of plant pigment found in many flowering plants. The primary biological function of these pigments in plants is to attract pollinating animals.

The most significant natural sources of chrysin include flowers in the Passiflora genus, commonly known as passionflowers. The commercial production of chrysin often uses Oroxylum indicum, a flowering tree in the Bignoniaceae family. Common names for this plant include Indian trumpet flower, midnight horror and oroxylum. In addition to chrysin, oroxylum seeds contain a high level of other flavonoids such as baicalein.

Oroxylum can approach a height of 40 feet, although its leaf stalks tend to wither and die regularly. Its flowers bloom at night and pollinated by bats. The large seed pods hang down from the tree’s bare branches, allowing the bats to access them easily. The fruits resemble bird wings, which may help to attract bats.

The most common use of chrysin as a dietary supplement is to support a healthy testosterone level, especially among male bodybuilders. Additional uses of chrysin include maintaining sexual health, antioxidant benefits and supporting healthy inflammation management. 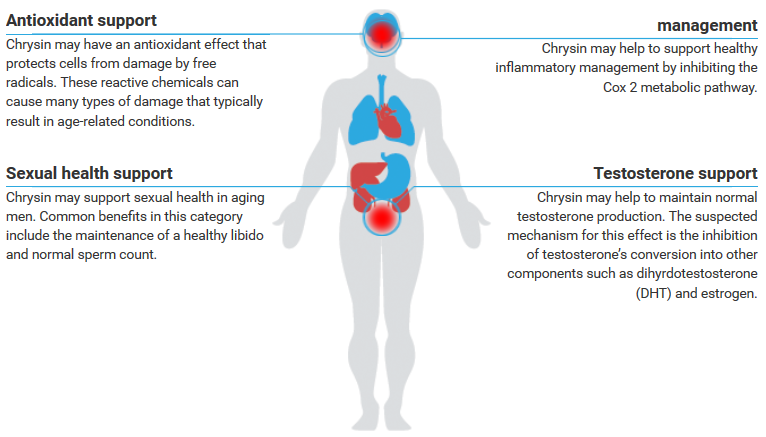 Signs You May Need Chrysin

Additional signs that you may benefit from chrysin include anxiety, gout and other unhealthy inflammatory conditions. Age-related skin conditions and other chronic conditions may also mean that the antioxidant effects of chrysin could help you.

Saw palmetto - Saw palmetto is the common name for Serenoa repens, which is the only species in the Serenoa genus. The most common use of saw palmetto in health supplements is to manage the symptoms of an enlarged prostate gland.

Damiana - Damiana is the common name for Turnera diffusa, a shrub commonly found in the southwestern United States and northern Mexico. It is commonly used to manage stress and maintain sexual desire.

Synonyms and Similar Forms of Chrysin