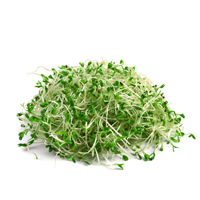 Alfalfa, known scientifically as Medicago sativa, is a flowering plant in the Fabaceae family, which includes peas. It is more commonly known as lucerne in Australia, New Zealand, South Africa and the United Kingdom. Alfalfa generally resembles clover and has purple flowers that grow in small clusters. Its spiralled fruit contains 10 to 20 seeds.

Alfalfa probably originates from south-central Asia and has been used as a forage crop for more than 2,000 years. It was first cultivated in Iran, although it is now cultivated in warm, temperate regions throughout the world. Alfalfa is usually harvested as hay, but it may also be stored as silage or used as greenchop.

The primary value of alfalfa as a crop is the combination of its high yield and nutritional value. It usually has the best feeding value and highest yield of all forage crops in areas where it is well-adapted. Alfalfa is also highly resistant to drought due to its deep root system.

Alfalfa’s high protein content and digestible fiber makes it especially valuable for dairy cows. It is also useful for beef cattle, goats, horses and sheep. Dehydrated alfalfa and concentrated alfalfa are frequently used to feed poultry. Alfalfa is also edible by humans, and the young sprouts are often added to sandwiches and salads.

Alfalfa is particularly beneficial when taken with a number of vitamins and minerals. The process of preparing alfalfa for this purpose generally consists of dehydrating the leaves and grinding them into a powder. Alfalfa is available in several forms, including loose powder, tablets and tea.

The high level of essential nutrients in alfalfa extract is of the reasons it works so well in proprietary supplement blends. It may also benefit people who need extra support to manage healthy cholesterol levels, symptoms of menopause or blood health. 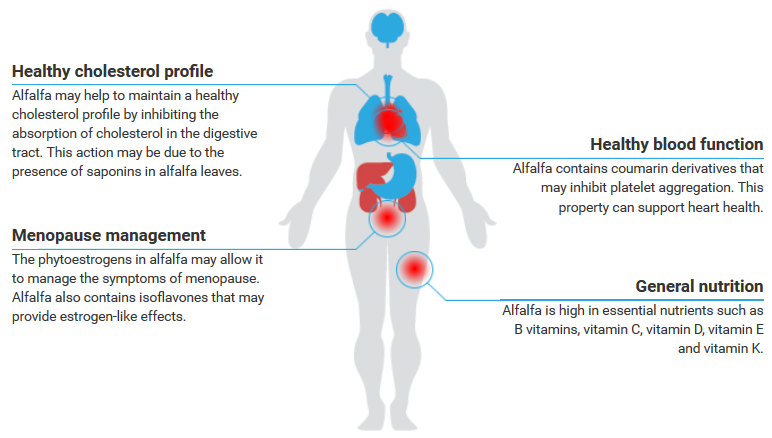 Signs You May Need Alfalfa

An unhealthy cholesterol profile and accumulation of fatty plaque in the arterial walls is one of the most significant signs that you may need alfalfa.

You may also benefit from alfalfa if you are experiencing menopausal symptoms.

Additional signs that you should take alfalfa include the symptoms of various nutritional deficiencies. In particular, a vitamin D deficiency may mean that you need sun-dried alfalfa.

Synonyms and Similar Forms of Alfafa