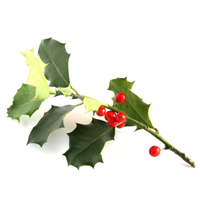 Butcher´s broom, known scientifically as Ruscus aculeatus, is a flowering plant that also has many other common names such as box holly, knee holly, kneeholm, jew’s myrtle, pettigree and sweet broom. It belongs to the Asparagaceae family, which includes asparagus. The young shoots of butcher’s broom may also be prepared and eaten like asparagus.

Butcher’s broom originates from Central Europe, although it is now cultivated throughout Europe and the Mediterranean region. It grows best in full sun with moist soil, and the ideal growing temperature for butcher’s broom is between 40 and 65 degrees Fahrenheit.

Butcher’s broom is a small shrub that can grow to a height of one foot. The leaf-like structures that grow on the primary stems are actually flattened stems known as cladophylls. Tiny flowers grow on the cladophylls in late winter and spring and are usually green or white in color. These flowers will eventually develop into red berries.

The intended use of Butcher’s broom in herbal medicine is generally to constrict the veins and strengthen capillary walls. Researchers believe that this effect is primarily caused by ruscogin, which is one of the most pharmaceutically active components in butcher’s broom extract. This extract also contains many other steroidal saponins that may account for this herb’s effects.

Support for the circulatory system is one of the most common reasons for taking butcher’s broom extract. Related uses of this dietary supplement include the management of swelling and healthy artery function. 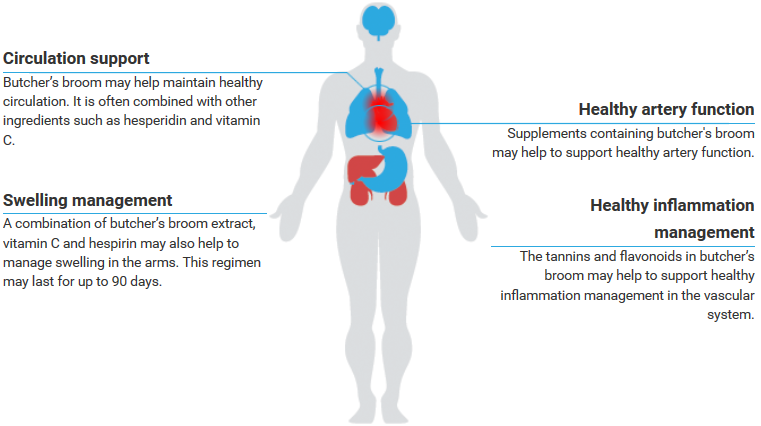 Signs You May Need Butcher’s Broom

The most significant signs that you may need butcher’s broom are related to poor circulation, especially in the legs. These symptoms primarily include cramps, heaviness, itching, discomfort and swelling.

Additional signs of unhealthy circulation include hemorrhoids, varicose veins and restless leg syndrome. Butcher’s broom may also help with water retention and constipation, as well as alleviating dark circles under the eyes.

Hawthorn Extract - The most common uses of hawthorn extract involve the support of normal heart functioning. It is also used to manage stress and anxiety.

Quercetin - Quercetin is a flavonol that is found in many fruits and vegetables. It is typically used to support the cardiovascular system, including a healthy cholesterol profile and circulation.