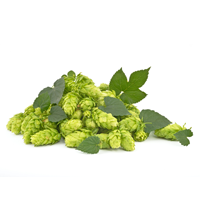 The hop plant is known botanically as Humulus lupulus. The female flowers of this plant are also commonly known as hops. The best-known use of hops is in flavoring and stabilizing beer, although it is also commonly used in herbal medicine.

The hop plant is a climbing, herbaceous plant that must be trained to grow vertically when cultivated commercially. It is native to Europe and western Asia, although hop plants are now cultivated throughout the world. Many varieties exist, and beer is often classified according to the variety of hops that it contains.

The first known use of hops in making beer occurred during the ninth century. Before this period, beer was flavored with other bitter herbs such as burdock root, dandelion, ground ivy, heather, horehound and marigold. Hops quickly became the most popular flavoring agent for beer, and villages in the Middle Ages typically had a barley field and hop garden specifically for this purpose.

Hops has a bitter flavor that’s primarily used to balance the sweet taste of malt in beer. It also has an anti-bacterial effect that favors the growth of brewer’s yeast over that of less desirable microorganisms that would otherwise spoil the mash. The reduction in spoilage is the most significant reason for favoring hops over other flavoring agents.

New Zealand Pacific Gem Hops is a special cultivar of Humulus lupulus. It has a consistently high level of oils, which include alpha acids, beta acids and cohumulone. The relaxing effects of hops may be at least partially due to 2-methyl-3-buten-2-ol, which is a degradation product of the alpha acids. Its high oil content creates an international demand for New Zealand Pacific Gem Hops by both beer breweries and health supplement manufacturers.

New Zealand Pacific Gem Hops is grown in Nelson, New Zealand. The whole hop cones are harvested, dried and ground with a proprietary process that keeps the hops as cool as possible. This process helps to retain the flavor and oils of the fresh hops, which tends to be unstable.

The primary benefits of hop flakes in health supplements involve the brain and nervous system. The active components in hops may also provide weak estrogen effects. 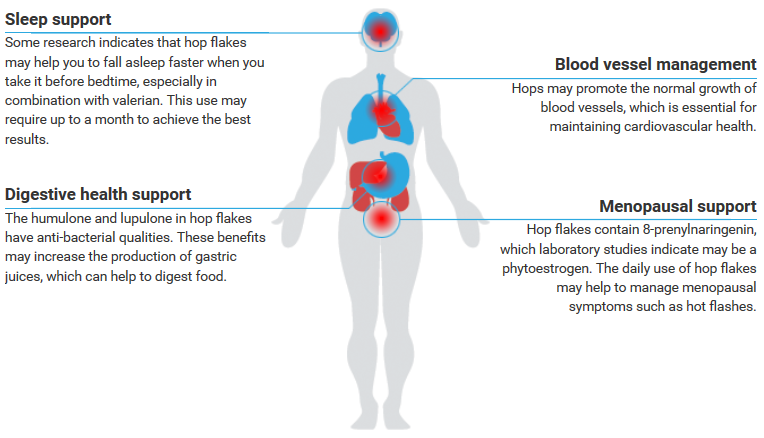 Signs You May Need Hop Flakes

A need for mild sedation is one of the most common indications that you may benefit from hop flakes. These signs include insomnia, anxiety, nervousness, restlessness and tension.

You may also want to take hop flakes if you have a poor appetite, difficulty in urinating and indigestion due to insufficient gastric juices. Additional reasons to take hop flakes include menopausal symptoms such as hot flashes and the need to start breast milk.

Valerian - Valerian is the common name for Valeriana officinalis, a perennial flowering plant in the Caprifoliaceae family. It has white or pink flowers with a sweet scent that bloom in the summer. Valerian is often used in herbal medicine as a mild sedative, and it is also a source for the amino acid valine. The dried or powdered root is the most valuable part of the plant in herbal medicine.

Passion flower - Passion flowers may be any member of the Passiflora genus, which contains about 500 species. However, this common name typically refers specifically to Passiflora incarnata, especially within the context of health supplements. The most common uses for passion flower include insomnia and relief from general discomfort. The fresh or dried leaves of the passion flower are often used to make a tea.