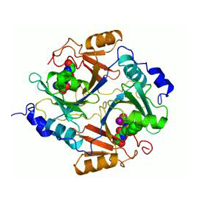 Cellulase is a collective term for enzymes that break down cellulose, which is a polysaccharide, or complex sugar. These enzymes are also effective against similar polysaccharides such as beta-D-glucans, hemicellulose and lichenin. The process of breaking cellulose into monosaccharaides, or simple sugars, is known scientifically as celluloysis. Cellolases often hydrolyze, or split, cellulose molecules at the 1,4-beta-D-glycosidic bonds that link the monosaccharaide molecules together in a cellulose molecule.

Cellulase is primarily produced by bacteria and fungi that feed on plants, since cellulose is a common structural component in plants. The ruminating chambers of herbivores often contain bacteria that produce cellulase. This arrangement allows the herbivores and bacteria to form a symbiotic relationship that benefits both life forms. Some species of termites are also able to digest cellulose in this manner.

Cellulases may be classified into five types depending on the type of reaction they catalyze. An endocellulase hydrolyzes internal bonds of cellulose, while an exocellulase breaks bonds at the end of the cellulose chain. Cellobiases hydrolyze cellulose into individual monosaccharides. Oxidative cellulases use radical reactions to break down cellulose, and cellulose phosphorylases break cellulose down with phosphates instead of water.

Bacteria often produce more multiple cellulases that form a complex supramolecule known as a cellulosome. This structure may contain all five types of cellulases, although only endocellulases and cellobiases actually hydrolyze 1,4-beta-D-glycosidic bonds.

Enzidase® TR4000 is a complex of food-grade cellulases that are derived from the fermentation of Trichoderma reesei, a species of filamentous fungus. This complex contains both endo-cellulases and exo-cellulases that directly attack cellulose, its oligomers and other derivatives of cellulose. Enzidase® TR4000 has a significant saccharifying effect on cellulose, meaning that it readily liberates glucose molecules. The prolonged hydrolysis of cellulose by this enzyme complex therefore produces substantial amounts of glucose.

The physical state of cellulose has a dramatic effect on its susceptibility to cellulase. For example, crystalline forms of cellulose such as cotton and wood have the greatest resistance to hydrolysis. The techniques for making cellulose more susceptible to cellulose generally consist of decreasing its crystalline structure through chemical or mechanical means.

The ability of cellulase to break down cellulose, such as hemicellulose in bee pollen. Cellulase helps to support the body’s ability to manage healthy blood sugar levels and cholesterol levels as well as antioxidant activity and digestive health. 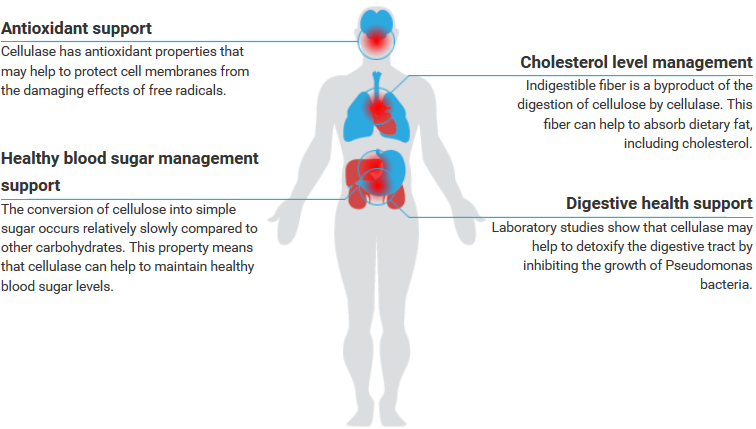 Signs You May Need Cellulase

An unhealthy blood sugar level is one of the most significant signs that you could benefit from cellulase. You may also need cellulase if you have an unhealthy cholesterol profile. Additional indications that you should take cellulase include the inadequate absorption of nutrients from carbohydrates, especially with vegetarians.

Some age-related conditions caused by free radicals may also benefit from cellulase, especially those that affect the gastrointestinal system.

Lipase - A lipase is any enzyme that helps to hydrolyze fats. They perform many essential biological roles such as the digestion, transportation and processing of fats.

Amylase - Amylase is an enzyme that helps to hydrolyze starch into sugar. It is typically included in health supplements to augment the body’s natural supply of amylase that’s produced by the pancreas and salivary glands.