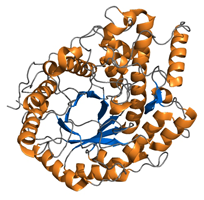 Amylase is an enzyme that helps to break down complex carbohydrates into simple sugars. Humans and some other mammals secrete amylase from the salivary glands and pancreas to begin the digestive process. Amylase causes starches such as potatoes and rice to become slightly sweet as they are chewed.

The German scientist Erhard Friedrich Leuchs described the ability of saliva to hydrolyze starch in 1831. The French chemists Jean-François Persoz and Anselme Payen isolated an amylase complex called diastase from germinating barley in 1833. Alexander Jakulowitsch Danilewsky separated amylase for the first time in 1862.

The ability to digest starch efficiently became more important to humans during the Agricultural Revolution, which began about 12,000 years ago. Prior to this time, humans relied largely on hunting as a means of obtaining food and received about 35 percent of their caloric intake from carbohydrates. The shift to agriculture increased this figure to about 50 percent.

The AMY1 gene is responsible for producing salivary amylase. Multiple copies of this gene can exist, such that a larger number of AMY1 genes results in greater amylase production. Most people today rely primarily on starch as a source of calories and may have up to six copies of the AMY1 gene. However, people in hunter-gatherer societies like the Biaka in central Africa typically have only two to three copies of the AMY1 gene.

The ability of amylase to hydrolyze starch primarily benefits the digestive system. Additional health benefits of amylase include support for the immune system as well as management of inflammatory conditions and support for aging. 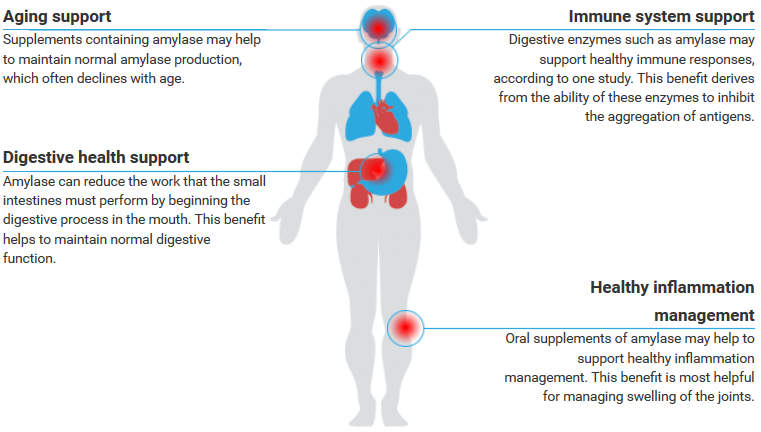 Signs You May Need Amylase

The most likely causes of insufficient amylase production are advancing age and a diet low in complex carbohydrates. A low amylase production may also have a genetic cause. Common digestive signs that may mean you need amylase supplements include constipation, gas and stomach upset.

You may also benefit from amylase if you have skin rashes, seasonal conditions and mood swings. Degenerative conditions due to a compromised immune system may mean that you should take amylase supplements.

Protease - A protease is an enzyme that hydrolyzes the peptide bonds between amino acids in a polypeptide. Their primary biological purpose is to digest protein.

Papain - Papain is the common name for papaya proteinase I, which is found in papaya plants. Its best-known use is in meat tenderizers, especially in South American cuisine. Papain is also used in dental products for managing cavities.