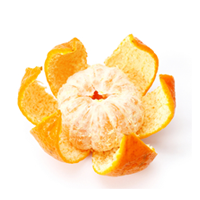 Hesperidin is a chemical that is primarily found in the Rutaceae family of citrus fruits. Its most abundant source is the bitter orange, known scientifically as Citrus aurantium, which many contain up to 2,500 parts per million of hesperidin. Other citrus fruits such as lemons, limes and oranges also contain high levels of hesperidin. A few plants outside the citrus family such as peppermint have a significant hesperidin content.

The French chemist Lebreton first isolated hesperidin in 1828 from the inner white layer of citrus fruits known as the mesocarp. He named it after “hesperidium,” which is a Latin word for citrus fruits. Hesperidin is chemically classified as a flavanone glycoside, and it also has an aglycone form called hesperetin. A hesperidin molecule consists of a hesperitin molecule bound to a rutinose molecule, which is a disaccharide. This sugar molecule makes hesperidin more soluble in water than pure hesperetin.

Plant defense is the primary biological role of hesperetin, which also gives citrus fruits their characteristic flavor. Sweet oranges (Citrus sinensis) are the most abundant dietary source of hesperidin. The highest concentrations are in the peel and mesocarp, so orange juice with pulp has more hesperidin than orange juice without pulp. Hesperidin is inexpensive to produce at high levels of purity since it is a natural by-product of citrus fruit cultivation.

Hesperidin and other related flavonoids such as rutin can reduce the permeability of capillaries, which is their primary biochemical effect. These flavonoids may also produce many other pharmacological effects. Normal dosages of hesperidin and its related compounds have no reported signs of toxicity. 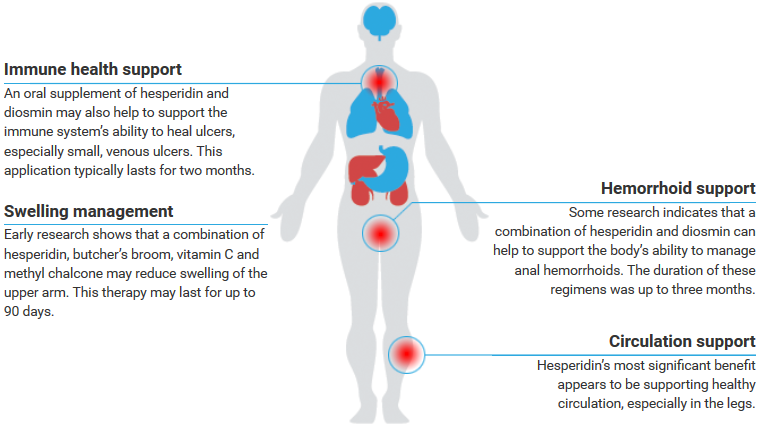 Signs You May Need Hesperidin

The most significant indications that you may need hesperidin supplements are signs of unhealthy circulation, including an abnormal leaking of blood from the capillaries or visible bruising. This condition typically causes discomfort, weakness and cramps at night, especially in the legs.

Additional signs that hesperidin could help you include heaviness, itching and swelling in the extremities, especially in the upper arms. Hemorrhoids and venous ulcers may also indicate that hesperidin supplements may benefit you.

Turmeric - Turmeric is the common name for Curcuma longa, an herb in the ginger family. It helps to manage inflammation in the body and is a source of antioxidants.

Quercetin - Quercetin is a flavonol that is found in many fruits and vegetables. It’s typically used to support the cardiovascular system, including a healthy cholesterol profile and circulation.

Synonyms and Similar Forms of Hesperidin