Xtend Life Ingredient L-Carnosine For Support As We Age 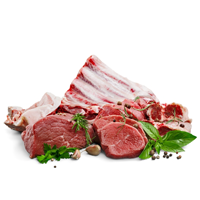 Carnosine is known scientifically as beta-alanyl-L-histidine. It is composed of one molecule each of the amino acids histidine and beta-alanine, and is therefore known chemically as a dipeptide. The L form, or isomer, of carnosine is biologically active in humans. L-carnosine is generally found throughout the bodies of animals, although is most concentrated in the brain and muscles.

L-carnosine is readily available in animal protein, especially red meat. It is not present in plants, so strict vegetarians don’t receive l-carnosine from dietary sources. The blood plasma level of l-carnosine drops to zero within several hours of eating red meat, indicating that l-carnosine is metabolized rapidly despite the relatively slow digestion of protein. This property means that the effects of l-carnosine are probably short-lived.

The Russian chemist V. Gulevich isolated carnosine and carnitine in 1900. Many scientific studies since then have established that l-carnosine has strong antioxidant properties that may provide a variety of health benefits. L-carnosine can scavenge free radicals in the body, which are highly reactive ions in the presence of oxygen. Free radicals can cause many types of damage known collectively as oxidative stress when they react with cellular components, especially the cell membranes. L-carnosine can also scavenge other reactive chemicals such as alpha-beta unsaturated aldehydes, which are formed by fatty acids in cell membranes during oxidative stress.

The biochemical actions of l-carnosine include the chelation of divalent metal ions, which can help reduce damage to DNA molecules. Additional benefits of l-carnosine derive from its ability to help support the healthy function of telomeres in the chromosomes. L-carnosine also supports the body’s ability to reduce the production of advanced glycation end-products (AGEs), which can contribute to a variety of degenerative conditions.

L-carnosine’s health benefits are generally due to its antioxidant properties, which support many age-related conditions. The specific uses of l-carnosine include support for the skin, joints, digestive system and memory. 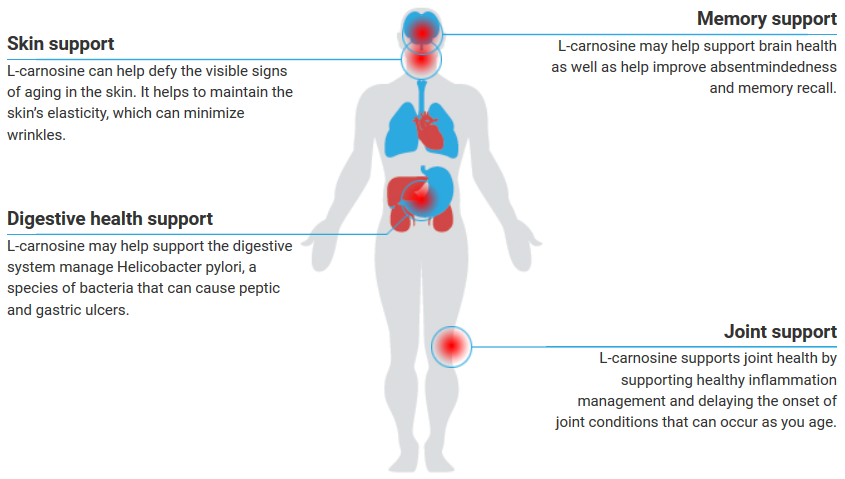 Signs You May Need L-carnosine

Strict vegetarians are most likely to have a deficiency of L-carnosine, since they are unable to obtain it from their diet. L-carnosine deficiency is also common among individuals who do not consume enough beef, fish and poultry.

L-Carnitine - L-carnitine is an ammonium compound derived from the amino acids methionine and lysine. Plant and animal cells use it to transport fatty acids into the mitochondria among many other biochemical functions.

L-Taurine - L-taurine is an amino acid that occurs naturally in many types of animal tissue, especially bile. It serves many roles such as antioxidation and the stabilization of membranes.

Synonyms and Similar Forms of L-Carnosine

Return to XtendHealthAsia.com Home Page from Xtend Life Ingredient L-Carnosine For Support As We Age