L-methionine is an essential amino acid in all multi-celled animals. It must be obtained from diet and food sources since it is unable to be biosynthesized in the body. The minimum daily requirement of L-methionine for an adult male is 13 milligrams per kilogram of body weight. This quantity is normally easy to obtain from a complete diet.

L-methionine is one of the 20 proteinogenic amino acids in humans, meaning that it is used to synthesize proteins. It is one of only two of proteinogenic amino acids that contain sulfur, with the other one being cysteine. Methionine acts as a sensor for a few reduction-oxidation (redox) reactions but does not otherwise play a catalytic role in human biochemistry. Biochemists have conjectured that this lack of a strong role is an indication that L-methionine became part of the human genetic code relatively recently.

The support of healthy liver function is one of the most common reasons for taking L-methionine. They are also used to support exercise recovery, connective tissue production and cardiovascular health. 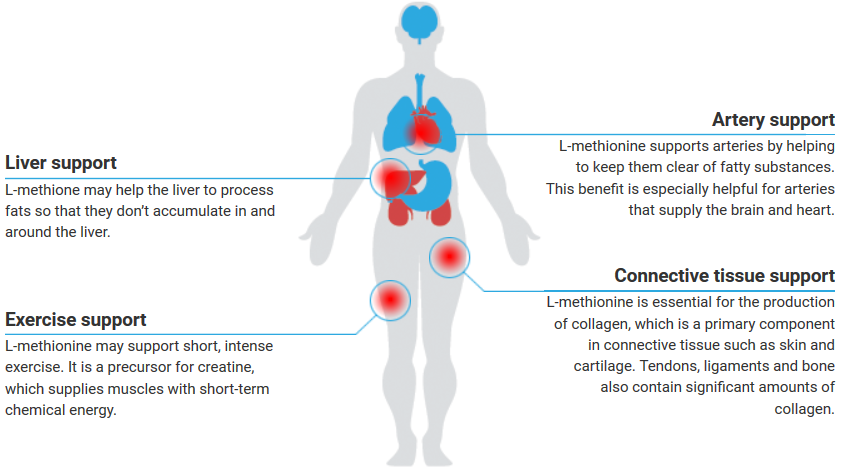 Signs You May Need L-Methionine

The people most likely to have a deficiency of L-methionine are those with a low intake of animal protein such as strict vegetarians. The most common signs of an L-methionine deficiency include a fatty liver, edema and skin lesions.

Children who don’t receive enough L-methionine in their diet may also have a growth rate that’s below average. Low L-methionine levels may contribute towards other conditions such as hair loss, low moods and muscle weakness.

L-taurine - L-taurine, known chemically as 2-aminoethanesulfonic acid, is a major component of bile and the large intestines.

Vitamin B6 - Vitamin B6 is a collective term for a group of structurally similar compounds. It is used in many reactions involving amino acids, glucose and lipids.

Synonyms and Similar Forms of L-Methionine