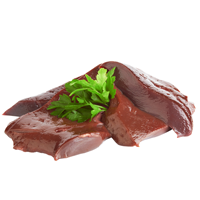 Choline bitartrate is choline combined with a salt of tartaric acid. It has a much better absorption rate than pure choline, which is an essential human nutrient. Choline is chemically related to the B group of vitamins, although the Food and Nutrition Board of the Institute of Medicine in the United States did not classify choline as an essential nutrient until 1998.

Choline is a component of sphingomyelin and phosphatidylcholine, which are commonly used to build cell membranes. Choline is also a precursor for acetylcholine, a neurotransmitter that performs many functions relating to muscle control and memory.

Choline is synthesized by the liver in small quantities, but humans must obtain the great majority of the choline they require through dietary sources. Animal protein is the best source of choline, especially the liver. Vegetable sources of choline include beans, nuts, peas, spinach and wheat germ.

The German chemist Adolph Strecker first isolated choline in 1862 from pig and ox bile. He named it after the Greek word “chole,” meaning bile. The German pharmacologist Oscar Liebreich first synthesized choline in 1865, although he originally named it “neurine” after the nerve tissue used in the process. This naming issue was resolved in 1898, when choline and neurine were shown to be identical.

Choline’s role as a nutrient was first recognized in 1922, when it was found to be necessary for preventing fatty liver. Researchers also established in 1975 that choline supplementation increased the production of acetylcholine. This discovery led to increased research in the relationship between dietary choline and brain function. 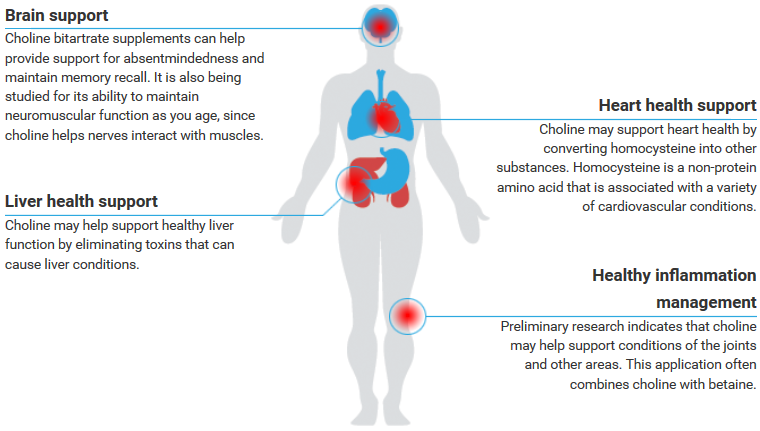 Signs You May Need Choline Bitartrate

The physical signs that most strongly indicate a choline deficiency include fatty liver disease and hemorrhagic kidney necrosis. Additional signs that you may need choline include various neurological conditions that affect strength and coordination. A high level of the enzyme ALT is often used to identify low choline levels.

Inositol - Inositol may help support low moods and may relieve stress and frustration. It is an essential component in the synthesis of the neurotransmitter serotonin, which is a mood stabilizer.

Beta-Glucan - The most common use of beta-glucan is to support the immune system. Additional uses of this supplement include heart health and support of the digestive system.